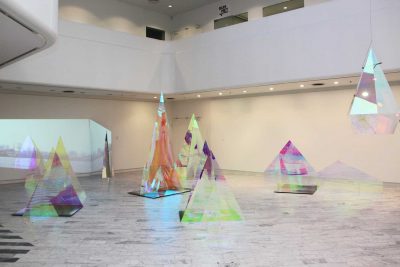 In her exhibition Panorama Danish/Korean artist and writer Eva Tind zooms in on the country of North Korea; a place we know to be a communist, isolated and totalitarian nation in deep poverty, but also happens to be the birth country of Tind’s biological father. And thus the source of a part of her own lost identity.

In 2012 Eva Tind traveled to North Korea for six days to experience the country in which her biological father was born. On her journey, she brought a camera and a notebook with which she documented and described her experiences. The trip resulted in two different artistic productions – the exhibition Panorama and the novel HAN.

In a visual and mixed media expression Panorama stands as Tind’s artistic reflections on her meeting with the North Korean society; a country shaped by profound paradoxes, contrasts and political dictatorship, but at the same time is telling these fairy-tale myths of beautiful flowers, great leaders and magical white unicorns. Tind describes it as; ”a hermetically sealed place that is impossible to decipher clearly. You find yourself constantly questioning, what truths lies behind its very controlled representation”.

Central in the exhibition is the title work Panorama; a semi-transparent installation of five sculptural elements cut out of radiant plexiglass and composed in parts, which the audience can walk around. The installation mimics both a mountain landscape, but also an architectural skyline. The tallest piece is a replica of the capital Pyongyang’s tallest skyscraper Ryugyong Hotel, which after 27 years of construction was standing unfinished. On the floor Tind has placed a group of selected photographs from her trip. Photographs of landscapes, hotel rooms, lamps and furniture are mirrored in a crisscross into each other. Each one varies, depending on the light and the viewer’s perceptive position. The multiple reflections give a fragmented and distorted reading of the images that suggests the sheer impossibility of decoding a clear image of North Korea.

On the high wall hangs the text piece Tourist Photos in forty one black frames. In a clear language Tind describes her tourist images that according to the travel agency’s censorship rules should not be publicly displayed. Each photo is induced on the back of the frame, but kept hidden by the rear cover. The viewer is left to visualize the described picture in is/ her imagination. Some of the texts also appear in the novel HAN, thus creating a bridge between art and literature.

Next to Tourist Photos is the work Proof (Bevis); a torso of a stuffed white horse with a horn attached to give the illusion of a unicorn. The work refers to a North Korean news headline from 2012, where Korean archaeologists claimed to have proved the existence of the unicorn, by discovering a prehistoric cave in the outskirts of Pyongyang that supposedly had been inhabited by a unicorn.

In addition to the exhibition Eva Tind has written the novel HAN. HAN is a travel novel in diary form that mixes documentary passages with fictive, dream-like dialogues between the author and her late father. The novel is on one hand a description of a totalitarian planned travel, where foreigners tourists are isolated from the local population and constantly monitored. On the other hand it describes the author’s desire to establish contact with her origins. 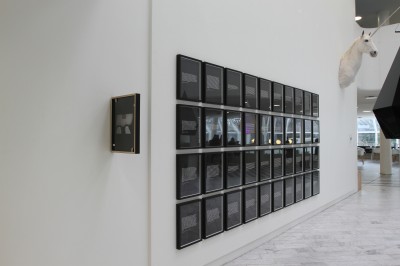 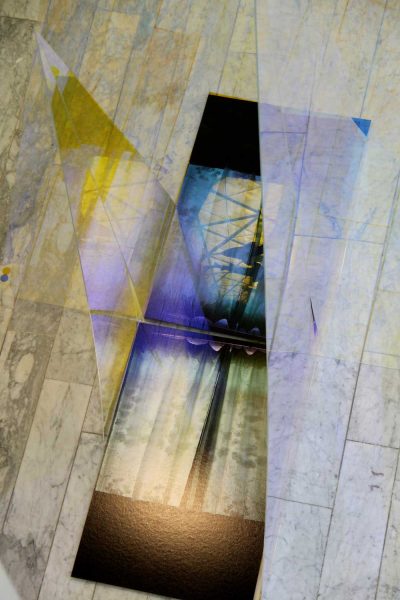 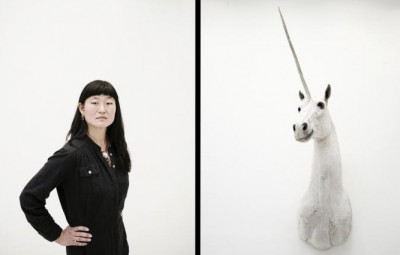 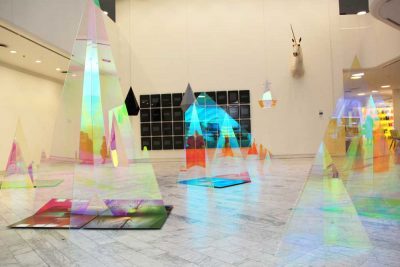